When Do Personal Injury Claims End Up in Court?

Posted on behalf of Roden Law Firm on Feb 22, 2021 in Personal Injury 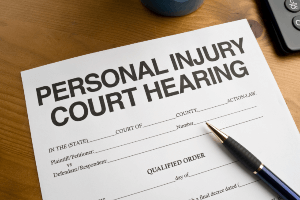 Most personal injury claims never make it to trial because they are either settled before a lawsuit is filed or after, but an agreement is usually reached before the case ever ends up before a jury.

However, there are some instances when a claim may require a lawsuit. If you have questions about pursuing compensation after suffering a personal injury, contact Roden Law to schedule a free initial consultation. We have helped many injury victims and have recovered millions in compensation.

Why Would You Need to File a Lawsuit?

Claims generally only end up in court when the parties involved, typically the insurance companies and the injured party’s legal representative, cannot come to an agreement on the value of the case.

One of the most common reasons the disputing parties may not agree to a settlement is because one, or perhaps both of the parties, are denying liability. Sometimes, when fault for an accident is unclear, insurance companies deny a claim. The injured party may be partially at fault but the insurer may exaggerate this and claim the victim is 100 percent to blame.

Another reason the parties may not come to a mutual agreement is that the insurance company made a lowball offer that is not enough to cover the damages. Insurers may counter the victim’s claims about the value of the case by saying the victim has preexisting injuries and is trying to get more money for damages that have nothing to do with the accident.

What Happens After a Lawsuit is Filed?

After a lawsuit is filed, there are two directions the case may take: the claim goes to trial, or the two parties manage to reach an agreement.

If the case makes it to trial, both parties are given the opportunity to argue their case before an impartial jury.

What Are the Risks of Going to Trial?

There are risks to both parties when a lawsuit is filed for an injury claim. The biggest, of course, is losing the case or not getting the desired verdict. For an insurance company that might mean paying out more money than the injured party may have settled for as well as paying court costs. For the injured party, it may mean paying the court fees and getting stuck with medical bills. These are generally the reason most claims never make it to trial.

What Are the Pros of Filing a Lawsuit?

Although there are risks involved in taking a claim before a jury, there are still some positives.

With a trial, you have the chance to present your argument and provide evidence to back up your claim, and prove the insurance company is liable for your damages. A jury may award you more compensation than your lawyer may have been able to obtain in a settlement. The settlement may also include compensation for things like pain and suffering and possibly punitive damages.

The Savannah personal injury lawyers at Roden Law know the tricks insurance companies use to deny or devalue claims and are prepared to file a lawsuit to help you pursue the compensation you need for medical bills, lost wages and other damages.

Our attorneys have successfully tried and settled various types of cases. We do not charge you anything up front or while we work to build your claim and you do not owe us anything unless we recover compensation on your behalf.