How Dashcam Footage Can Help Prove Fault for a Car Accident 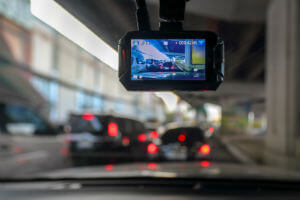 Dashcams are becoming more prevalent as drivers intend to use them as a tool in case of an accident. But how exactly are dashcams used as evidence?

Below, we discuss how dashcams can be used to prove fault in an accident and when dashcams are inadmissible. If, after reading the information below, you still have questions about dashcams or how they may affect your case, contact an experienced Savannah car accident lawyer at Roden Law for your free legal consultation.

What Is a Dashcam?

A dashcam is a camera that you install on your dashboard to record certain events. Cellphones and other devices are sometimes used as dashcams. People can also purchase stand-alone dashcams. Sometimes, dashcams may be connected to your window instead of your dashboard.

These devices are wired to your vehicle and record footage as you drive. Typically, dashcams will have a forward-facing and rear-facing camera to record both angles. Most dashcams start and stop automatically, based on when the vehicle is turned on or off.

The video footage is typically stored in an SD card that you can later review. Most dashcams record on a loop, so the video records over previous footage when the memory is full. If you are involved in an accident, it is important that you preserve the card and the recent video so that it does not accidentally get recorded over.

How to Use Dashcams to Prove Fault

Because dashcams may be recording near the time of the accident, they may provide powerful evidence to help establish fault. In many accident cases, it is one person’s word against another’s. A dashcam may be able to provide objective evidence that establishes how the collision happened or the factors that contributed to it.

Footage of the accident can be convincing evidence. Some of the ways that dashcams may prove fault include:

Because car accident cases often turn on proof of how the other driver acted in a negligent manner, dashcam footage can be a central piece of evidence in these cases.

When Dashcams Cannot Be Used as Evidence

Although dashcams may be used as valuable evidence in some cases, they cannot necessarily be used in every case. For example, you may not be allowed to record footage on private property or in restricted areas. The court might refuse to see the footage in these types of situations. Additionally, if any audio is recorded, you must have consent from your passengers. Because dashcam footage can be subjective, the court or insurance adjuster may refuse to look at it for any number of reasons, such as its reliability, angle, time it was taken or other reasons.

Even if your dashcam footage can legally be submitted as evidence, you may not want to use it. For example, the footage may reveal something that could prove some portion of the accident is due to your own actions. In other situations, the footage may not be clear or may not show anything useful to your case.

Contact Our Reputable Firm for Help with Your Claim

If you were involved in a car accident and you or the other driver had a dashcam installed, it is important to seek legal assistance from an experienced car accident lawyer. At Roden Law, we will investigate your claim and carefully examine all evidence involved in your case. We can discuss whether dashcam footage may be used as evidence and how it may impact your case.

Because we work on a contingency fee basis, we do not charge any upfront fees and only get paid if we win or settle your case. Contact us today to schedule a free case consultation.