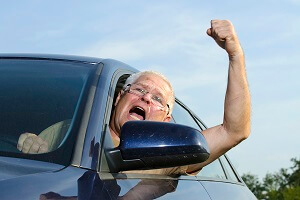 Be careful when you are driving on our state’s roadways, as we have some of the most aggressive drivers in the south and the entire nation. That is according to a new study from GasBuddy about aggressive driving across the nation.

If you or a loved one has suffered an injury because of an aggressive driver, you should contact an experienced Savannah car accident lawyer at Roden Law for assistance with your claim. We can explain how aggressive driving contributed to your crash and how to build a case for why the other driver is at fault.

According to GasBuddy’s study, Georgia ranks third in the nation for aggressive drivers. There is an aggressive driving event every 8.2 minutes in this state. Additional findings include the following:

Researchers used data from the Drives feature in the GasBuddy app to create the study. This feature gives drivers an assessment of their habits during their drive to help them improve fuel efficiency.

Researchers reviewed data from the app in the top 30 metro areas based on population. Data was collected between November 2018 and February 2019.

There are numerous examples of aggressive driving on Georgia roadways, including the following:

Speeding is one of the most common forms of aggressive driving. That is why Georgia has a Super Speeder law. Super speeders are those that do either of the following:

Being dubbed a so-called “Super Speeder” can result in an additional fine of $200 along with ticket and court costs. Convictions require payment of fines within 120 days or the person’s license will be suspended.

Convictions for aggressive driving in Georgia can add points to the driver’s license. You can avoid having points added by pleading no contest. However, if you accumulate at least 15 points in a two-year period, your license will be suspended.

If an aggressive driver is under 21, and he or she gets four points on his or her license, it will be suspended for six months. A second conviction for aggressive driving will lead to a yearlong license suspension.

When you or a loved one suffers at the hands of an aggressive driver, it is important to have an experienced, successful legal team on your side. The team at Roden Law will work to build a strong case by collecting evidence, including police reports and photos from the scene. We will also gather medical records to help determine the extent of your injuries and link them to the accident. We can talk to the insurance company and interview all relevant witnesses. If necessary, we can reconstruct the accident to determine what happened. Additionally, we will calculate the value of your damages and explain the full range of possible compensation owed to you.

You can fill out our free case evaluation form or call us today to schedule a no-obligation consultation. We work on a contingency fee basis, so you are not charged for our services unless you win.